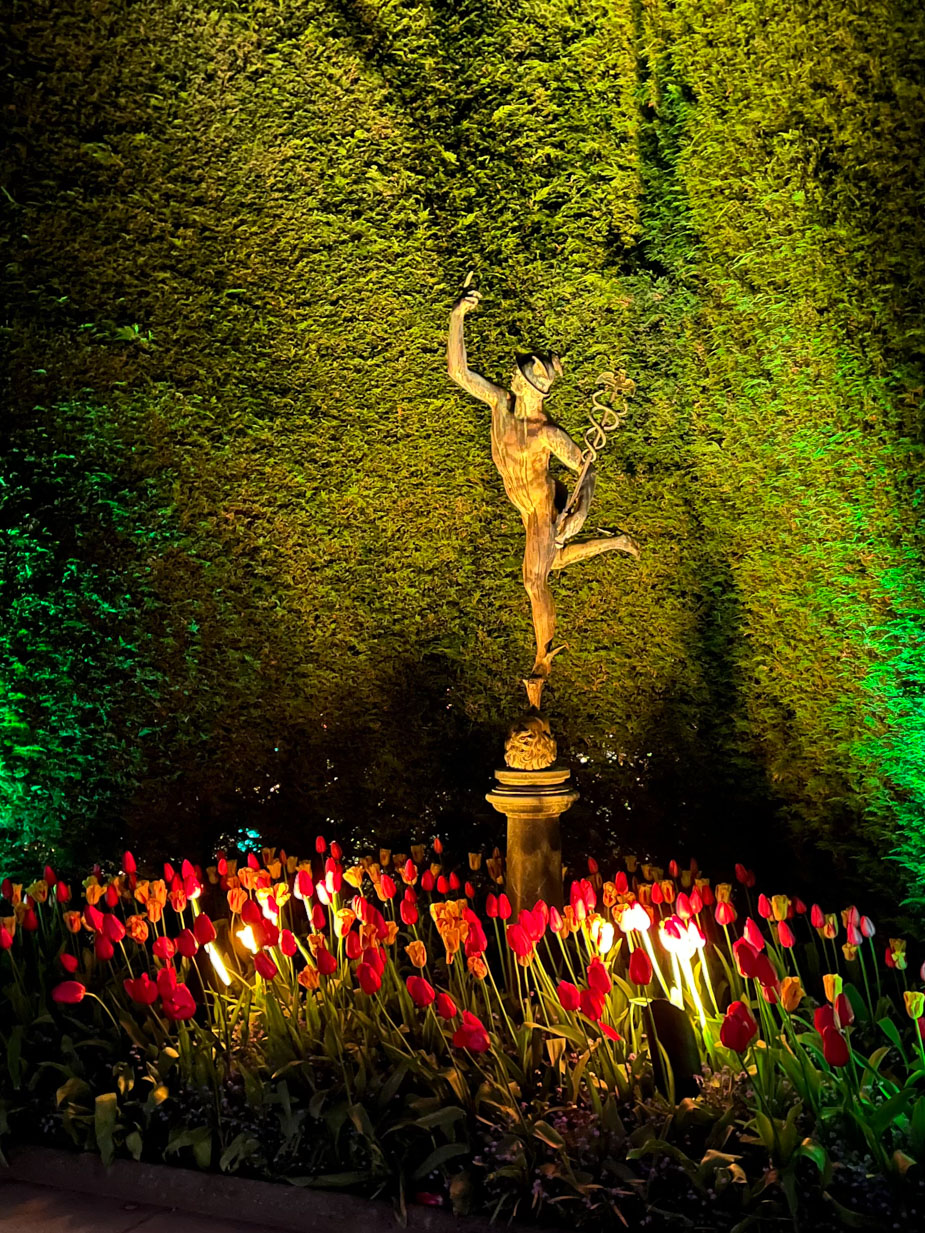 Chapter 8:5b-18 (ESV) - So I lifted up my eyes toward the north, and behold, north of the altar gate, in the entrance, was this image of jealousy. And he said to me, “Son of man, do you see what they are doing, the great abominations that the house of Israel are committing here, to drive me far from my sanctuary? But you will see still greater abominations.”

And he brought me to the entrance of the court, and when I looked, behold, there was a hole in the wall. Then he said to me, “Son of man, dig in the wall.” So I dug in the wall, and behold, there was an entrance. And he said to me, “Go in, and see the vile abominations that they are committing here.” So I went in and saw. And there, engraved on the wall all around, was every form of creeping things and loathsome beasts, and all the idols of the house of Israel. And before them stood seventy men of the elders of the house of Israel, with Jaazaniah the son of Shaphan standing among them. Each had his censer in his hand, and the smoke of the cloud of incense went up. Then he said to me, “Son of man, have you seen what the elders of the house of Israel are doing in the dark, each in his room of pictures? For they say, ‘The Lord does not see us, the Lord has forsaken the land.’” He said also to me, “You will see still greater abominations that they commit.”

Then he brought me to the entrance of the north gate of the house of the Lord, and behold, there sat women weeping for Tammuz. Then he said to me, “Have you seen this, O son of man? You will see still greater abominations than these.”

And he brought me into the inner court of the house of the Lord. And behold, at the entrance of the temple of the Lord, between the porch and the altar, were about twenty-five men, with their backs to the temple of the Lord, and their faces toward the east, worshiping the sun toward the east. Then he said to me, “Have you seen this, O son of man? Is it too light a thing for the house of Judah to commit the abominations that they commit here, that they should fill the land with violence and provoke me still further to anger? Behold, they put the branch to their nose. Therefore I will act in wrath. My eye will not spare, nor will I have pity. And though they cry in my ears with a loud voice, I will not hear them.”

Question to consider: What are some of the ways the number four is used in scripture?

There are number patterns throughout scripture. These numbers can be taken in both a literal and figurative sense. For instance, there are literally four directions on a compass (north, south, east, and west), but when all four directions are mentioned together, it figuratively refers to the entire land or the entire earth depending on the context. The four creatures before the throne of God mentioned throughout Ezekiel were a literal number of creatures, but them moving together like lightning figuratively referred to God’s reach throughout the earth.

Even though God could have shown Ezekiel hundreds of examples of sin by the people of Judah, He specifically chose to show him these four, starting from the outer court of the Gentiles and moving to the inner court between the porch and the altar. I believe the altar here is not referring to the altar of incense which would have been in front of the curtain to the Most Holy Place, but the Bronze altar that the priests used to offer the sacrifices for the people. In doing so, I believe God was expressing that the sin of Judah was so great, that it corrupted the whole land to the point where it had reached His very doorstep.

The north gate, in the very entrance to the temple was an image of jealousy, basically referring to an idol of a pagan god. There are a number of commentators that try to guess which idol it was, but I think God purposefully doesn’t give a name to it because it doesn’t belong in the place in which He promised to dwell with Israel. As God said, the house of Israel put it there to drive God from His sanctuary.

As bad as this was, God took Ezekiel further into the temple through a hole in the wall. As Paul wrote to the Ephesians, “Take no part in the unfruitful works of darkness, but instead expose them. For it is shameful even to speak of the things that they do in secret.” (Ephesians 5:11-12) In this case, the Sanhedrin (seventy elders) stood in the court of the Israelites which was filled with all kinds of pagan idols and carvings and being led by Jaazaniah the son of Shaphan. Shaphan the son of Azaliah was first mentioned in 2 Kings 22, and was the secretary to king Josiah, a king who did what was right in the eyes of the Lord. The high priest, Hilkiah, discovered the book of the Law when going through the temple vault, and Shaphan took it to Josiah and read it to him which caused people to turn back to God and staved off judgment for another generation. Shaphan had sons like Ahikam who protected Jeremiah from those who wanted to kill him (Jeremiah 26:4), but the only mention of Jaazaniah is here to highlight his wickedness.

Then God took Ezekiel further into the court of the women where the women of Israel were weeping for Tammuz. According to Canaanite mythology, Tammuz was a handsome shepherd who had a romantic relationship with the goddess, Astarte, before being killed by a wild boar. Similar myths are among the Babylonians (Dumuzu and Ishtar) and Greeks (Adonis and Aphrodite). Whoever he was, it was abominable that the women of Israel be weeping for him, let alone in the temple of God.

The final abomination was to enter the inner court in front of God’s house which contained the Bronze altar. Instead of making sacrifices for the people of Israel, the priests turned their backs on God and bowed down in worship to the sun. With this vision of the utter corruption of the house of Israel, whatever nonsense the elders were spouting to Ezekiel in his home was an empty expression of remorse. God said they “put the branch to their nose” (some texts “branch to My nose”). The New Living Translation uses the modern expression “thumbing their noses at me” which suggests that their acts of remorse were insincere and a mockery. Rather than avoiding God’s wrath, they had kindled it.

Dear heavenly father, please give us the faith to come to You in all sincerity and reverence. Set us apart from the world and give us a heart to love and serve You through the righteous name of Christ Jesus. Amen.