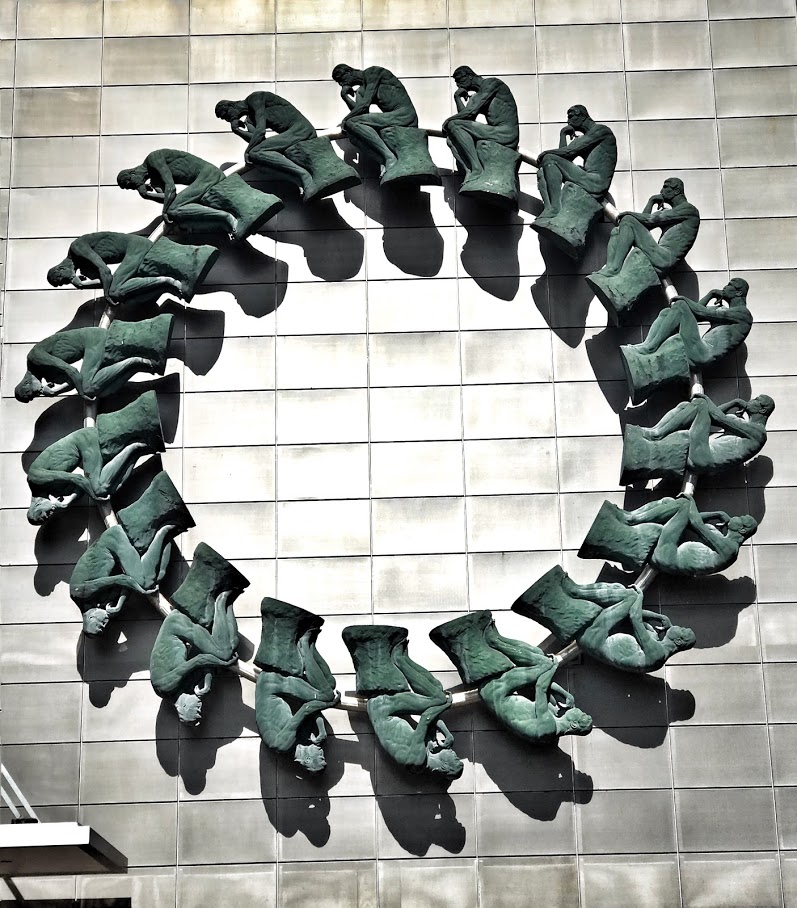 Chapter 4:5-16 (ESV) - For Cain and his offering [the Lord] had no regard. So Cain was very angry, and his face fell. The Lord said to Cain, “Why are you angry, and why has your face fallen? If you do well, will you not be accepted? And if you do not do well, sin is crouching at the door. Its desire is contrary to you, but you must rule over it.”

Cain spoke to Abel, his brother. And when they were in the field, Cain rose up against his brother Abel and killed him. Then the Lord said to Cain, “Where is Abel your brother?” He said, “I do not know; am I my brother's keeper?” And the Lord said, “What have you done? The voice of your brother's blood is crying to me from the ground. And now you are cursed from the ground, which has opened its mouth to receive your brother's blood from your hand. When you work the ground, it shall no longer yield to you its strength. You shall be a fugitive and a wanderer on the earth.” Cain said to the Lord, “My punishment is greater than I can bear. Behold, you have driven me today away from the ground, and from your face I shall be hidden. I shall be a fugitive and a wanderer on the earth, and whoever finds me will kill me.” Then the Lord said to him, “Not so! If anyone kills Cain, vengeance shall be taken on him sevenfold.” And the Lord put a mark on Cain, lest any who found him should attack him. Then Cain went away from the presence of the Lord and settled in the land of Nod, east of Eden.

Question to consider: Does Cain demonstrate repentance when confronted with Abel’s murder?

As we talked about yesterday, the Lord rejected Cain’s offering because it was not done in faith and yet accepted that of Abel and counted his faith as righteousness. No wonder Cain’s face fell in anger!  The one who was brought up to think he was going to be the savior of the world was in fact the seed of the serpent, and the one who was “nothing” was counted as righteous.  What a crisis of character that must have been!  Yet in the moment we discover that we are not as righteous as we thought we were, what should our response be?  Repentance!  At that moment, Cain could have humbly thrown himself on the mercy of God and repented for his selfishness, anger and pride.

He then could have given a new sacrifice that was acceptable to God. Instead, he let his anger consume him, led his brother out into the field and murdered him! The Jewish targum goes into more detail about this to give context. It says that Cain told Abel that even though the world was created good, it was not governed that way since God showed favoritism to Abel. Abel responded that there was no issue with the way God governs, and that the real problem was that Cain did not give as good of an offering. The two brothers then got into an argument about whether there was life after death and whether they would be judged for their actions in this life. In that argument, Cain gets angry and bashes Abel’s head with a rock.

The new testament writers seemed to affirm this. The apostle John wrote in 1 John 3:12, “We should not be like Cain, who was of the evil one and murdered his brother. And why did he murder him? Because his own deeds were evil and his brother's righteous.”

Once again, God shows mercy when He asks Cain where his brother is just as He did for Adam and Eve when He asked who told them they were naked.  It was one more opportunity for Cain to confess his sin and ask for forgiveness.  But with the lying and uncaring tongue of his father, the devil, he says, “I don’t know; am I my brother's keeper?”

When God confronts Cain about his sin and strips him of his vocation by cursing the ground for him, Cain had yet one more chance to repent and ask for forgiveness.  His parents tried to pass-off responsibility for their sin, but when given their punishment, they ultimately accepted the sacrificial garments from the Lord.  However, Cain is more concerned with his punishment than his sin, and in the end, he walked away from God and went his own way.

Hebrews has more to say about Abel.  In the second half of chapter 11:4, it says, “…And through his faith, though he died, he still speaks.”  Then, a chapter later, in the midst of describing the heavenly mount Zion from which Jesus rules, it says in 12:24, “…and to Jesus, the mediator of a new covenant, and to the sprinkled blood that speaks a better word than the blood of Abel.”  In what way does the blood of Abel speak?  Abel was counted as righteous, and yet his life was taken from him so the blood of Abel cries out for Justice!  And in what way does the blood of Jesus speak a better word?  Jesus was not only counted as righteous, but he fulfilled the law perfectly and was without sin.  Jesus’ life was not taken from him as some would suppose.  He willingly laid it down as a sacrifice for our sin and drank the full cup of God’s wrath that was meant for us.  So his blood does not cry for justice but mercy!

So the question we must ask ourselves today is, “If there are two kinds of people in the world, which one am I?  Will I fiercely cling to my own righteousness like Cain, or will I be like Abel and humbly submit to God and put my faith in the promised seed of the woman, Christ Jesus?”

Dear heavenly father, we thank You for giving us opportunities to face our sin and repent of it. May we not take these opportunities for granted but cling to Your mercy and the cleansing work of Jesus. Please give us the desire to serve You better and the courage to stand on Your word even when the world says we shouldn’t. Amen.